Threatened by "cultural imperialism", along with changing fashions and tastes, Vienna's coffee houses still manage to cling on to an air of something special. 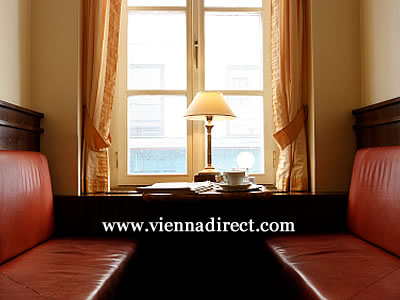 In German there is the idea of Kaffeehauskultur (in other words, the certain specific way that a Viennese café actually functions.

For example, it might be the more formal "look" of some of the coffee houses (or waitresses!), or the selection of sweets and pastries, or the idea that you can sit as long as you want, reading a paper or just passing the time of day with friends. Or setting the world of literature or philosophy or science alight, as your predecessors did (maybe even in the same room).

Like much else to do with the city, it is difficult to disentangle the myth from the truth when it comes to the Viennese and their relationship with coffee. 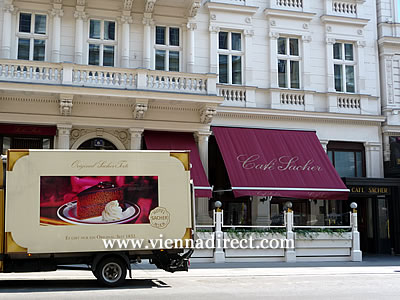 According to the much-told tale, coffee is alleged to have been popularised in Vienna at the time of the battles with the Turks and their siege of the city.

A Turkish-speaking resident of Vienna acted as a spy to help the Austrian and Polish armies to victory and, as his reward, he requested a sack of beans which had been discovered left behind by the Turks during their retreat.

The surreptitious and somewhat sneaky Pole - a Herr Kolschitzky - knew what the beans were, opened Vienna's first coffee house and the rest is culinary history.

Although that's a fine story and the timing is roughly correct (mid-17th century) the fact is that coffee houses were spreading across Europe from the Orient and the first Imperial licence for a coffee house in Vienna was granted in 1685 to a Greek businessman named Diodato. Or was he Armenian...?

Nonetheless the number of coffee houses increased until by the end of the 19th century there were 600 or so around the city. Scientists and poets, artists and politicians - they all rubbed shoulders over a coffee (and again we should be careful of a certain amount of historical licence here) because the coffee house was warm and welcoming while their apartments were cold and damp.

Mokka - the base espresso type of coffee. Served alone in a small cup with water on the side. It is generally served as a "Brauner" with a small pot of cream as well.
Verlängerter - literally a "lengthened" coffee and essentially what the Italians call Café Americano - an espresso weakened with water
Wiener Melange - a long coffee served with steamed milk and froth
Kapuziner - a mix between the Melange and the Brauner - coffee with a dash of frothed milk already added (the name comes from the colour of the robes worn by the Capuchin monks)
Einspänner - double espresso with whipped cream (the name comes from a one-horse carriage)
Fiaker - as above with the addition of cherry brandy (a fiaker is the two-horse carriage one can see around the city) 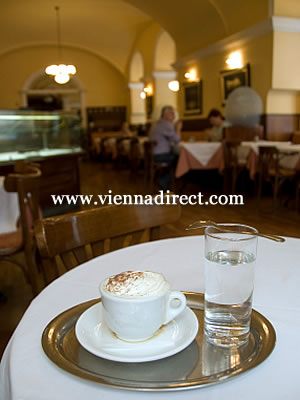 The bill will normally only be brought on request (it was considered uncivilised to "hurry" customers away from their coffee, although economic pressures and the necessity to turn tables at busy times are slowly having an effect these days).

A male waiter is generally referred to as "Herr Ober" (a head waiter) - even if he isn't.