Vienna and its Markets

For a city so concerned about its culinary traditions, a healthy market scene in Vienna is essential.

Helped by EU funds, Vienna is busy renovating many of its most traditional market locations. The city council is spending 23 million Euros to try to keep the history but bring the behind the scenes infrastructure (such as electricity supply and rubbish storage) up to date. 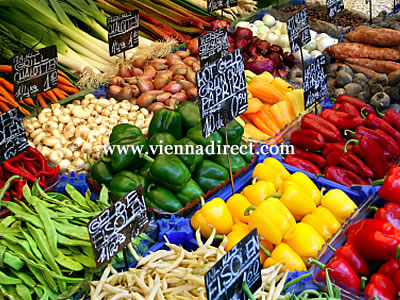 The most famous - and trendy - of the Vienna general markets is the Naschmarkt - located in the 6th District outside the Ring.

The Naschmarkt - in existence since the First World War - boasts smart stalls and bars in its covered section, through to a large food area and an extensive flea market. The market is undergoing a rather slow and extensive (and controversial in some cases) renovation which is eventually planned to finish in 2016. The market is open Mon-Sat during the daytime, the flea market only on Saturdays.

It is literally located on top of the Wien River, which was covered in this area in the 19th century, and is in a traditional market place from the 18th century.
Underground stations: Kettenbrückengasse or Karlsplatz

The Brunnenmarkt out towards Ottakring in the 16th District is the most popular of Vienna's markets - around 60,000 customers and sightseers visit it every week.

It is renowned as being a proper "street" market with a multi-cultural ethos - it is traditional to barter here, for example. The origins of the market also date back to the 18th century. The market is open Mon-Sat during the daytime, with Saturdays being by far the most popular day.
Underground station: Thaliastrasse or Josefstädterstrasse

The Karmelitermarkt is a more traditional style of market nearer the centre of Vienna in the 2nd District on the other side of the Danube Canal. It was originally founded nearby in the 18th century and moved to this spot in the early 1900s.
Underground station: Taborstrasse

The Kutschkermarkt is another of Vienna's street markets in the 18th District next to the busy Währingerstrasse shopping area. It is particularly well-known for its flower stalls.
Underground station: Währingerstrasse / Volksoper

The Rochusmarkt is located in the 3rd District. It was originally located on the site of an old cemetery which was moved outside the city walls in the 18th century and thus quickly became the location for a market. The market was then known as the Augustinermarkt - the new name comes from a move in the 1990s to the vicinity of the Rochuskirche. The market has a name for its locally-produced and speciality foods.
Underground station: Rochusmarkt

With the map of Vienna and the markets below, you can zoom in or out or move in all directions by using the controls to the left. And the buttons on the top right switch between a traditional map view, a satellite view and a mixture of the two.