What About Those Viennese Sausages?

Vienna, in German, is Wien - and Wiener are known over much of the world as the famous hot dog sausages.

Except, perhaps surprisingly, by the Viennese themselves - who use the alternate term of Frankfurter (or literally "a sausage from Frankfurt"). 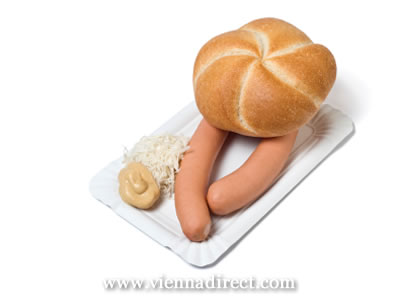 Wiener or Frankfurter or Hot Dog

Those who just eat the things have probably never thought about these concepts.

But there is a difference in what is meant by each term depending on where you are from.

All the terms above are referring to sausages which are smoked and preserved and heated in hot (but not boiling) water.

A Frankfurter, apparently, has been eaten in some incarnation since the Middle Ages in the particular region of Germany. And it refers to a sausage which is made from pork. If you are from Germany.

A Wiener, on the other hand, is slightly different in that it also uses beef in the mix of meats. If you are from Germany.

In a somewhat similar way to the beer halls of Munich, Viennese sausage stands are reputed to be great social levellers - you get to meet businessmen and street cleaners rubbing shoulders while they order their traditional Viennese fast food snack.

The original Viennese sausage stands were created in the time of the Imperial monarchy to provide employment for returning war veterans who were disabled.

And, even though Vienna has been engulfed in the transatlantic tide of Starbucks and the golden arches, the tradition of the sausage stand lives on.

A visitor will find it just about impossible to order like a local but here are a few of the sausages you might find on offer:

The Frankfurter - described above, often served with a slice or two of brown bread
The Burenwurst (or Klobasse) - a thicker, spicier sausage made with some ham added to the mixture
The Käsekrainer - a sausage which includes some cheese (originating from the eastern part of the old Empire - Krain is a major region in present-day Slovenia)
The Bosna - a spicy sausage inside a long roll garnished with onions and a mustard-curry sauce (the name probably comes from the association of former Yugoslavia - Bosnia - with spicy food)
The Debreziner - another spicy smoked sausage originally hailing from the lands of the old Empire (in this case, Hungary)

Some of the sausages can be served sliced as well as whole, and with brown bread, or a roll. Various types of mustard, ketchup, horseradish and occasionally a mild curry powder are used as a garnish. Beer or a white wine spritzer are the usual accompaniments, but stands have plenty of soft drinks as well.