Although Austria has removed many of the trappings of its imperial past, the legacy remains in Vienna in the stores and suppliers that used to hold the coveted title of Supplier to the Imperial Court.

It is still possible to shop at outfitters that once clothed the emperors and associated nobility. And it is still common to see dishes which stem, so the stories say, from those days of imperial grandeur.

Kaiserschmarrn is probably the best-known of all the "Imperial" delicacies. It is a hearty meal frequently found in mountain huts which is much loved by skiers and walkers alike. And it's the source of no end of confusion when this sweet dish is poorly translated as an "Emperor's omelette" on the evening hotel menus and served, as is the custom in Austria, as a main dish. 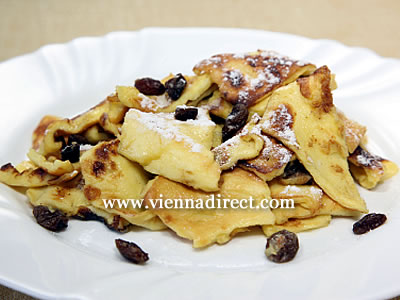 The "schmarrn" part has now come to mean "rubbish" in colloquial German ("So a Schmarrn" = dialect for "what rubbish!") and one of the theories for the name comes from the idea that the dish developed from pancakes that were rejected by the Emperor.

However it is far more likely that the latter part of the word comes from the same root as "schmieren" (to grease or smear) and relates to the practice in the poorer communities of frying up a combination of flour, milk and eggs and using some preserved fruit as added taste.

The legend which stems from this root says that the Emperor Franz Josef I was served a traditional meal while out hunting but, because it was a meal for the Emperor, more milk and eggs and some raisins were added to the recipe.

Another linguistic theory holds that the "Kaiser" part was originally "Casa" - meaning something homely or made at home. However the ingredients became the preserve of the better-off and, when Austrian cooks started to use the imperial prefix "Kaiser" to mean a special class of delicacy in the 19th century, "Casaschmarren" became "Kaiserschmarrn".

Whatever the origin, the current incarnation of the Kaiserschmarrn is a heavy sweet pancake, often with raisins, which is chopped up and dusted with icing sugar and served with stewed plums or stewed apple on the side.

The "Semmel" refers to a bread roll - and a particular one at that. The traditional Kaisersemmel is made from white flour and a dough that has been kneaded for a certain length of time. The five folds of dough which create the "star" shape on the top help make the roll more crusty than the normal plain roll in other countries. 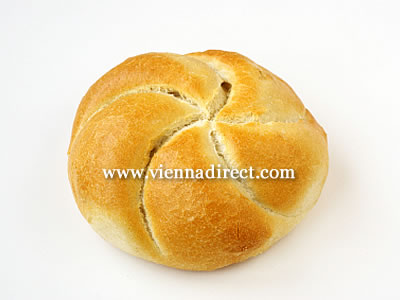 Where the "Imperial" part of the description comes from is open to interpretation. The most popular story tells of the fixed prices for foodstuffs imposed by the Imperial Court in the 18th century. A deputation of Viennese bakers visited Josef II, who was so impressed by their product that he gave them permission to describe their rolls as "Emperor's Rolls" and freed them from the restrictions of the price controls.

A less interesting alternative source for the name points to a baker named Kayser at around the same time. And an even less popular theory says that the source may well have come from the Italian language...

The Guglhupf is a circular tall cake (a firm sort of sponge) with a hole in the middle and a wavy pattern over the remaining cake. The imperial version - the "Kaiserguglhupf" - is with added raisins and, allegedly, comes from the preference of the 19th century court to have this served at breakfast. (In those days, serving sweet items such as this would have been considered a outward sign of prosperity by the upper classes.)