The attraction of food as a pleasurable part of life permeates through all layers of Viennese life.

The coffee houses are a place to while away the hours reading a newspaper at leisure or debating the world's rights and wrongs. Of course, not forgetting something sweet to go alongside...

The Beislküche (literally "pub food") offers a hearty meal for the taste of the working man.

While the story of the sausage is a story of fast food on the go in the city. This particular page concentrates first on an example of the Beislküche, with the one dish mostly closely associated with the city:

The Wiener Schnitzel is the dish most closely associated with the city, but it doesn't originally hail from Vienna at all.

The origins appear to be the very similar "cotoletta alla milanese" (Milan cutlet) from the northern Italian city. 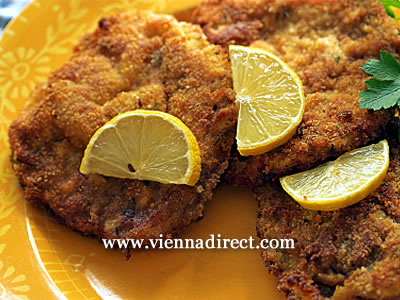 Viennese lore says that the dish was brought back to the city by the much-loved Field Marshal Radetzky von Radetz (he of the Radetzky March which traditionally finishes the New Year's concert in Vienna) in the mid-1850s.

However, this story appears to date from an Italian 20th century travel guide and the dish was around well before that time. Some Austrian researchers believe that the connection with Milan is also incorrect, as it was quite common for Viennese to import dishes from neighbouring lands but to leave the origins in the description, which didn't happen in this case.

Whatever the truth, a proper Wiener schnitzel is a thin escalope of veal which has been breaded and fried to a golden colour, served frequently with a cranberry sauce. The same dish made with pork also frequently appears on menus and is of course a cheaper alternative. The description "Wiener Schnitzel" is however protected, and these imposters are titled "Wiener Schnitzel vom Schwein".

This dish, reputedly another favourite of the court, is a classic boiled beef recipe. Although simple, it is considered one of the high points of Viennese tradition of hearty meat dishes. 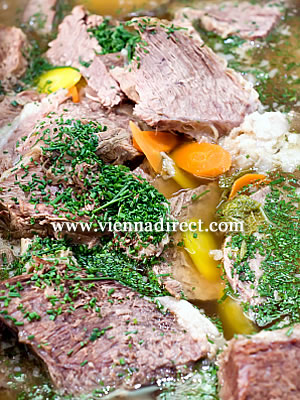 It is also an example of what used to be served as part of something called a "Wiener Gabelfrühstück" (literally "Viennese fork breakfast", the term refers to the custom of a "second breakfast" just before midday - in English it would be referred to as brunch).

The meat, taken from the rump, is a very lean cut with a strip of fat along one side. The meat is simmered in water along with traditional soup vegetables (carrots, leek and celery, for example) and then served, along with a portion of the broth, with boiled or fried potatoes and horseradish.

Another favourite Viennese culinary invention and another story of dubious historical provenance...

Many guides will tell the visitor that the shape of the "kipferls" dates back to the days when the Turks were besieging Vienna and they were originally made in defiance by the bakers. 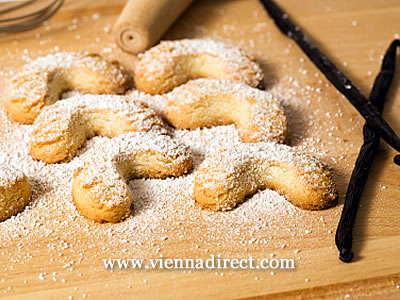 Quite what this act of defiance was supposed to effect - eating a sweet pastry with dusted with icing sugar - is never quite explained to the visitors' satisfaction however.

In fact the idea of pastries in the shape of horns goes back to pagan days and offerings to the female gods.

The pastries are made with a mixture of flour, butter, egg yolk and sugar, with added vanilla and either grated almonds or hazelnuts.

Nowadays the Vanillekipferl is part of the Christmas celebrations worldwide and in Austria they are frequently baked, along with other pastries, as a seasonal present for friends and colleagues.