For many travelers a visit to Vienna would not be complete without going to the Spanish Riding School and marveling at the famous Lipizzaner horses as they move gracefully to the rhythm of Viennese classical music.

Other sightseers would rather take a ride across the old town in one of those legendary horse-drawn buggies referred to as a Fiaker.

As for the Viennese living in the neighboring districts, they can hear the familiar clatter of hooves as the coachmen drive their carriages from the stables to the city center every morning.

Needless to say, horses are very popular among visitors, but few of them know that they can also be found outside of the Innere Stadt.

Near the famous Prater amusement park, is the Wiener Trabrennbahnverein, the Viennese Harness Racing Club, better known as the Krieau. 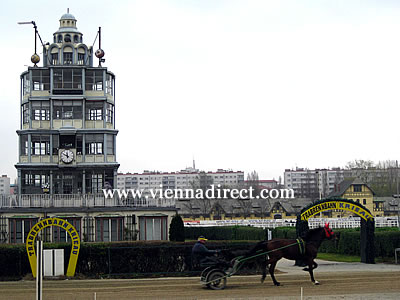 Part of Vienna since 1618, its name is derived from Kriegsau, which literally means war swamps, because of a long dispute between the Klosterneuburg Abbey and the city for this piece of land; back in the times when it was still an island in the Danube.

The horse racecourse built in 1878 is the second oldest track in Europe after the Moscow Hippodrome.

In 1913, Emile Hoppe, Marcel Kammerer and Otto Schonthal designed Europe’s first steel and concrete grandstand for the racetrack and also the tower from which the officials monitored the races. These three architects were Otto Wagner’s favorite students and collaborated with him after graduation before opening their own firm.

The tower is a historical monument and was restored in 2002 to its pre-war glory. Although the grandstands are also protected by cultural heritage, they were abandoned years ago when new stands were built right next to them.

Harness racing was practiced at the Krieau even before the horse racetrack was built. At the beginning races were individual time trials and there was no betting. Later on, racing enthusiasts were given the opportunity to bet on their favorite horses.

There were also thoroughbred horse races for nearly 150 years at the Trabrennbahnverein but the competition from local lotteries and football betting progressively reduced the number of races until they completely stopped in 2003.

Today the racing season runs from September to June and visitors are welcomed to ride the sulkies along with professionals during special events organized by the club several times a year.

In the summertime at the Krieau, there are several live concerts and an open-air cinema, playing movie classics on a giant screen in the middle of the racetrack.

With the map of Vienna and the Krieau below, you can zoom in or out or move in all directions by using the controls to the left. And the buttons on the top right switch between a traditional map view, a satellite view and a mixture of the two.