Vienna is a big city and in summer when it gets hot one thing residents and visitors alike prefer to do is to get away from that city feeling. Luckily Vienna has plenty of options near at hand which can help everyone recover from the city concrete in the summer sun.

There are also plenty of festivals in the summer months - take a look at this page on the site for an overview: Vienna Festivals & Events

The Donauinsel (Danube Island) is one of the most popular ways to take a break from Vienna throughout the summer months.

With biking, inline skating and walking trails along its 21km, plus a massive summer music festival, plus one of the trendiest nightlife locations, it's a place that comes alive during the hotter part of the year. 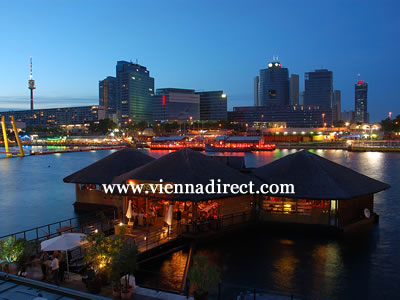 The island, which was manmade as part of a flood protection plan for Vienna, has some formal "beaches" - especially a family-friendly bathing area near the Kaisermühlen bridge - but most of the swimming is done from either bank up and down the island (there are unofficial nude areas towards either end of the Donauinsel). There are also floats for swimming and sunbathing. It should be noted that swimming and alcohol are rarely a good mix and that there are drownings every summer.

The nightlife centres around the area on either side of the Reichsbrücke - dubbed "Copa Cagrana" by some local wits after the beach in Rio (Kagran is the neighbouring suburb of Vienna). There is a floating bridge which leads from the mainland to the island and the area known as the "Sunken City" and plenty of bars, restaurants, lounges and discos.
Sunken City Website: www.donauinsel.at

The Donauinselfest (Danube Island Festival) is a free music festival which has been held every year since 1984 at the end of June. It is claimed to be the biggest free festival in Europe, although there is some debate about possibly inflated numbers of attendees (because of media and city sponsorship). It usually lasts for three days.
Danube Island Festival Website: donauinselfest.at

Vienna may be a big city but it has plenty of green islands and is surrounded to the north and west by hills.

There are a couple of signposted walks through the city, but longer walks are available on the edges of the city as it merges into the countryside.

The area to the north is an area of vineyards with views out onto the city, while to the west, the city suburbs reach the edge of the Vienna Woods.

In fact, the city government has put together a walk, designated as City Hiking Path 10 and marked with red and green signs, which would take the hiker around the city in six different stages and with a length of more than 100km.

Vienna lies near the end of the popular Danube Cycle Path (or at least the end of the Austrian section - if you wanted to you could carry on to the Black Sea) which starts from the border at Passau. So at least a few of Vienna's visitors may have even arrived by bike.

The city has a well-laid out system of cycle paths and a privately-operated Citybike system (where bikes can be taken from one depot and handed back at another). The first hour is free, once registered with the system, with further hours at fairly minimal charges.

Mountainbiking is available at the edges of the city in a similar area to the walking routes described above - that is, to the north and west of Vienna.
Citybike Wien Website: www.citybikewien.at

The Vienna Marathon - somewhat unsurprisingly, the largest in Austria - is held every year in the Spring. It started in 1984 and runs over the Reichsbrücke (pictured below) into the heart of Vienna. 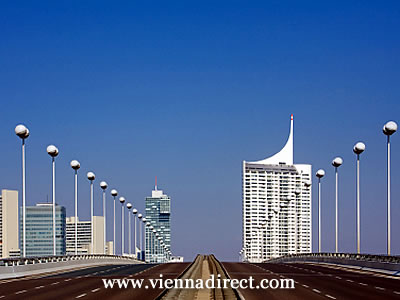 The course has been consciously chosen to go past some of Vienna's most attractive sights and attracts over 30,000 participants in the different levels of race on offer (apart from the full marathon, there is a half-marathon and various other categories).
Website: www.vienna-marathon.com