Although Vienna is in one of the lowest-lying parts of Austria, there is no mistaking that it is part of an alpine country and the winter months provide plenty of opportunity for city residents and visitors to enjoy the seasonal sports.

One of the loveliest views of Vienna in the winter is the Town Hall with an ice rink crowded with skaters in front of it. 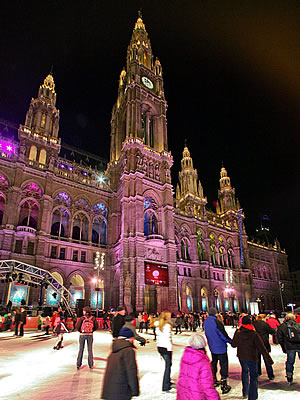 The city puts on the Wiener Eistraum every winter from late January through to early March.

More than half a million visitors take advantage of the mid-winter event to lace up the skates - the iced area is open from the morning through to late at night and is especially popular during the Fasching (Carnival) celebrations and the school holidays.
Website: www.wienereistraum.com
Photo: © stadt marketing wien

Another unusual ice skating option is the open-air rink high above the streets of Vienna. Engelmann artificial ice rink celebrated its centenary in 2009 and is located on top of a supermarket in the suburb of Hernals.
Website: www.engelmann.co.at

Cross country skiing trails are provided in the centre of the city in the Prater park area and on the Donauinsel. There are also some available in open areas in the suburbs, for example, at the Wienerberg and Schwarzenberg parks.

Despite its low altitude of just under 200m above sea level, Vienna actually does boast two (very small) ski areas within the city limits.

Both of them are off to the west of the city towards the more hilly Vienna Woods area. The largest is the Hohe Wand ski area with a single draglift and a slope of around 400m. It is the oldest ski run using artificial snow in Austria and offers floodlit skiing.
Website: www.hohewandwiese.com

The other very small area is the Dollwiese slightly to the north, which again has a single draglift of around 120m in length - probably only suitable for children and absolute beginners.

There are ski areas within an easy drive of Vienna however - an overview of them is given on Ski-Austria.
Website: Ski Resorts Near Vienna

Mulled wine, local specialities and the chance to pick up a Christmas present from one of the hundreds of stalls at Vienna's different Advent markets. The city offers all kinds of markets, from the local and traditional in neighbourhoods, through to the busy and commercial markets outside some of the main tourist sites.
Website: Christmas Markets in Vienna

With the map of Vienna and the venues below, you can zoom in or out or move in all directions by using the controls to the left. And the buttons on the top right switch between a traditional map view, a satellite view and a mixture of the two.