As befits a capital city, Vienna boasts a number of prominent clubs in various sports. (Ironically, however, the city is lacking in substantial venues for Austria's main and most successful sport - skiing.)

(Or soccer, for any visitors to the site from North America.)

Vienna has some of Austria's oldest and most successful football clubs and, as the largest city, has a fierce cross-town rivalry between the two main teams.

In recent years however the dominance of the Vienna clubs has been threatened by large-scale although sometimes temporary investment made in teams in other parts of the country (e.g. Innsbruck, Salzburg and Graz). 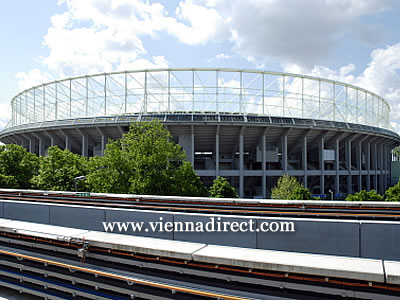 Although international matches are often played at venues around the country, the home stadium of the national team is the Ernst Happel stadium, located in the Prater Park and pictured above.
Underground station: Stadion

Rapid Vienna get mentioned first - for outraged Austria fans - because they are the oldest club and for the fact that they have a club website with an English section.

SK Rapid Wien were founded in the last year of the 19th century and are known as the "Hütteldorfer" after the location of the stadium or "Grün-Weiss" after their traditional green and white shirts.

Rapid have been crowned champions of the Austrian League 32 times and reached the European Cup-Winners' Cup final twice. They play at the Gerhard-Hanappi Stadium in the western 14th District of Vienna.
Underground station: Hütteldorf
Website: www.skrapid.at (English version available)

Austria Wien (strangely the Austria is Anglicised but the Vienna not) are the great city rivals of Rapid.

FK Austria Wien are known as the "Veilchen" - the Violets - after their strip and have won the Austrian Championship 23 times and reached the final of the European Cup-Winners' Cup once.

They play, after a somewhat nomadic existence, in the Franz Horr Stadium in the south of Vienna near the Sudosttangente motorway.
Underground station: Reumannplatz (this is a fair walk from the stadium but buses and trams are available)
Website: www.fk-austria.at

First Vienna is the oldest of the Viennese clubs but in recent decades very much a poor third in performance. They were founded in 1894 and played the first game at their current Hohe Warte ground there in that year.

The club currently play in Austria's second division (as is the custom nowadays confusingly named the Erste Liga - First League) after a spell in the lower leagues. They are known as the "Döblinger" after the location of the ground in the suburb of Döbling. The club have won the Austrian championships six times.
Underground station: Heiligenstadt
Website: www.firstviennafc.at

The Vienna Capitals are an ice hockey team in the top Austrian league with a relatively young history, having only been founded in the year 2000. They won the Austrian championship in 2005 and play in the Albert Schultz Eishalle in the Kagran part of Vienna.
Underground station: Kagran
Website: www.vienna-capitals.at

(The Albert Schultz Eishalle is also home to the successful EHV Sabres and the Vienna Flyers women's hockey teams. The traditional and historic WEV men's ice hockey club no longer exists in any meaningful form.)

The Vienna Vikings - currently known as the Dacia Vikings Vienna - were founded in 1983. They play in the Austrian league at the same Hohe Warte stadium as the First Vienna football club and have won the Austrian championship 10 times and the Eurobowl (usually against German teams) four times.
Underground station: Heiligenstadt
Website: daciavikings.com

The Vienna hotVolleys are Vienna's volleyball team - a sport which is very popular in central and Eastern Europe. They play, among other competitions, in the Central European MEVZA league along with their Austrian rivals from Innsbruck and teams from Eastern European countries. Their home matches take place at the Budocenter Wien in the southern part of the city.
Underground station: Tscherttegasse
Website: www.hotvolleys.at

With the map of Vienna and the stadiums and home venues below, you can zoom in or out or move in all directions by using the controls to the left. And the buttons on the top right switch between a traditional map view, a satellite view and a mixture of the two.