Vienna's international airport is located at Schwechat, a town around 20km to the south and east of the main city on the road towards Slovakia and Hungary.

It is run by a publicly-quoted company (although the city of Vienna and the state of Lower Austria still have sizeable shareholdings) and deals with just under 20 million passengers a year through the two terminals. The airport is scheduled to add a third terminal, the Skylink project, and is campaigning for a third runway. 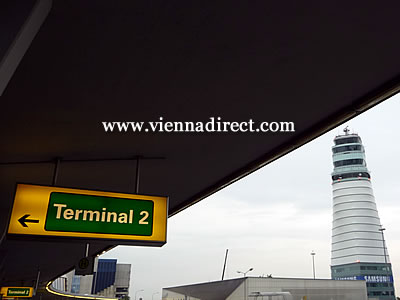 With Vienna being the capital of the country, most European and other major international airlines offer scheduled services but there are also a range of low-cost and charter airlines as well.

The airport came into being as a military airport at the start of the Second World War and was used by the British and French sectors during the occupation of the city in post-war Austria.

It officially became a civil airport in 1953 and has been continually expanded from that point due to increasing traffic and it is now one of the largest employers in eastern Austria. The current expansion plans not only include an extra terminal and runway but also a direct rail link to Bratislava.

Travel to the Airport

Most people travelling to Schwechat and Vienna Airport will use one of the two rail options:

There are also buses which run to the airport from various stops in Vienna city centre run by Vienna Airport Lines (part of the Postbus service). International bus services are also available from Eastern European cities such as Brno, Budapest and Bratislava.

The major car rental agencies are represented at the airport on the arrivals level. Those arriving with their own car will find spaces for 22,000 vehicles in short- and long-term airport parking.

There a quite a few local taxi companies offering trips to and from the airport, some of whom are listed on our airport transfers page.

With the map of Vienna and the airport below, you can zoom in or out or move in all directions by using the controls to the left. And the buttons on the top right switch between a traditional map view, a satellite view and a mixture of the two.