Vienna's mainline rail service has been revolutionised by the introduction of the new main railway station ('Hauptbahnhof') on the site of the old Südbahnhof. This has enabled through traffic, whereas previously many journeys across the city involved changes.

This was due to the use of rail terminals to serve parts of what was once a far larger Austro-Hungarian Empire. Nowadays all long-distance services pass through the main railway station. 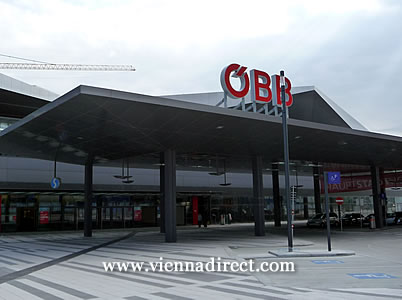 There are several other important train stations, notably Wien Meidling serving southern regional routes and the Westbahnhof serving, as its name suggests, routes to the west.

Thus a big station may have three different services: the main rail service, the regional rail service and the city underground trains. They will also be connected into the bus and tram services.

The S-Bahn is the regional service for Vienna and the surrounding districts (the "S" stands for "schnell" - "quick" in German). There are ten different main lines (there are a few smaller lines as well) and nearly 150 stations served by the local network (which is still run by the main Austria train operator, the ÖBB). Many of the services run on different lines to the main train service.

Visitors to Vienna should take note of the S-Bahn services as well as the underground trains (U-Bahn) as they can be equally useful in getting around the city.

With the map of Vienna below, you can zoom in or out or move in all directions by using the controls to the left. And the buttons on the top right switch between a traditional map view, a satellite view and a mixture of the two.