The economic triangle of Vienna, Bratislava and Budapest has been one of the fastest-growing of regions in the European Union in the last few years.

It's not a surprise then that a high-speed transport link has been built between two of those cities: Bratislava and Vienna.

What is a little unusual is that it is via the River Danube. 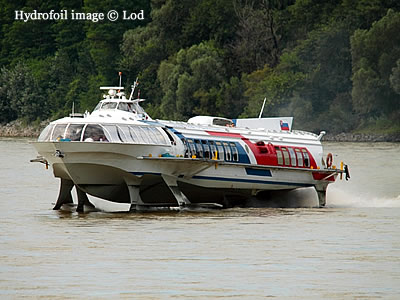 However the road connections between the two are still not particularly direct or built-out and the distance between the two cities is a little bit short to be dealing with travel to and from airports with the check-ins and boarding hassles.

The Danube has long been popular with river cruises. In fact, the journey from higher up the Danube at Passau and further down to Budapest is a fixed staple of holiday company brochures.

But the introduction of the high-speed hydrofoil links by two companies has made a big difference both to day-trip traffic and those who are looking to do some business in the neighbouring capital.

Getting To Vienna By River

There are two main companies who operate the hydrofoil services:

Twin City Liner is the Austrian company which is based in Vienna. It operates a year-round service, with one trip a day in winter and autumn heading in the Vienna-Bratislava-Vienna direction. From March through to October there are multiple services on the route with up to five departures and day in high season. This is the best option for those who are looking to spend the day in Bratislava and then return in the evening. The departure point is from the Twin City Liner jetty at Schwedenplatz.
Website: www.twincityliner.com

Lod are a Slovakian company based in Bratislava. They operate hydrofoil services from Bratislava to Vienna daily in July and August, five days a week in June and September and twice a week at the edges of the summer season. The service runs from Slovakia to Austria and back again, so it is a good option for those travelling from points in the east to arrive in Vienna. For those already in Vienna, it is also a good option for those looking for an overnight stay or a weekend in Bratislava. Departure point in Vienna is the Schiffstation Reichsbrücke.
Website: www.lod.sk