Vienna's tram system is one of the features of the city, as well as being one of the most useful for visitors.

In many other European cities, public transport can be a bit off-putting to the first-time visitor. 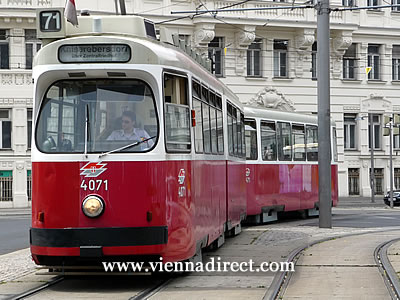 But the combination of the ring road around central Vienna and the tourist-friendly marketing of the tram system have helped to promote the city to the top of the European destinations where tourists use the local public transport.

The trams are also used by locals to get around the city. The Viennese affectionately call their trams "Bims" - from the word "bimmeln" (which comes from the ringing of the bell when the tram moves off).

History of Trams in Vienna

The original tram network in Vienna was created in the 19th century and the tram carriages were pulled by horses. These were followed by steam trams, until finally the first electric tram appeared at the end of the century.

The electric network quickly expanded in favour of the smellier and louder competition and spread out into the Viennese suburbs. The highpoint of the network was reached in the 1930s, but the stock of carriages was badly damaged in the Second World War and it took a long time for the city transport authorities to bring the tram network back to anything approaching its heyday.

By the 1960s, the trams were already facing strong competition from the new underground train system and the bus network.

The current tram system is run by the city-owned Wiener Linien, who also operate the Vienna Underground and most of the local buses, and is seen as an essential part of the public transport system in the city (in contrast to many other destinations who have removed their tram networks completely). It carries around 200 million passengers yearly.

Probably the most popular tram amongst tourists is the Ring Tram - a hop-on hop-off tram which does a circuit around the inner city on the Ringstrasse (the wide boulevard which follows the route of the old demolished city walls).

The Ring Tram runs during daytime every half hour. A full circuit lasts around 25 minutes. Tickets are available just for this tram on a single trip basis or as a 24-hour ticket. Note that the normal tram tickets or Vienna Transport tickets have no validity on this route.

The private Wiener Lokalbahnen AG runs a tram service between Vienna and the nearby town of Baden - a distance of 30km.

With the map of Vienna and the Vienna Tram Museum below, you can zoom in or out or move in all directions by using the controls to the left. And the buttons on the top right switch between a traditional map view, a satellite view and a mixture of the two.

The museum, with a display of historic trams, is open on Wednesdays, at weekends and on public holidays between May and October.