As the self-proclaimed "gateway to Eastern Europe" Vienna has a pretty good set of motorway connections to get people into and past the city.

And there are no real bugbears for those foreigners with a car in Austria at it is much the same as other Western European countries. 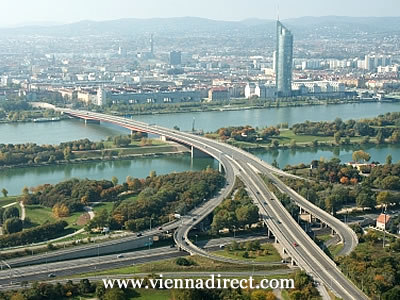 Drivers' license, Green Card and a reflective vest in the car are obligatory (those still with the old-style UK license may have fun watching traffic police trying to decipher them even though they are still valid).

In Austria, motorway use requires a "vignette" - a toll sticker which can be attached to certain points on the inside of the windscreen. There are also variable speed limits on some parts of the motorways which react to traffic density and environmental conditions. And upper motorway speed limits (daytime 130km/h) drop on certain motorways when driving later at night.

Finally note that from November to mid-April winter tires (or snow chains on at least two tires) are obligatory.

Getting To Vienna By Road

Vienna does have a number of Park + Ride locations on the outskirts of the city mainly in connection with U-Bahn stations. More information is available on the useful map published by the relevant section of the Chamber of Commerce: www.parkandride.at

Almost all of the inner city street parking is short-term parking (with meter). Those wanting longer term parking spots should choose a hotel or apartment with parking facilities or one of the overnight garages near the centre.

The main long-distance bus station is located at Vienna International Bus Terminal (reached via the Erdberg underground station on the U3 line). Buses run from here to many international locations. Buses from Vienna airport arrive either here, at the Westbahnhof railway station, at the Donauzentrum near the Kagran underground station on the U1 line, or the central Morzinplatz on the Danube Canal.

Bus services within the city are run by the semi-municipal organisation which also operates the tram network and the underground system.
Website: www.wienerlinien.at