Vienna's U-Bahn (underground train) system is a simple way to get around the city and, along with the trams, is one of the most useful for visitors and residents alike.

The underground railway as it currently exists was first conceived in the mid-1960s and construction had started by the late Sixties. 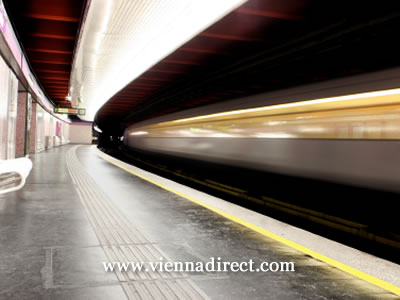 It wasn't the only idea for a city railway by any means - plans for a Vienna rail network had already been discussed in the late 19th century. This eventually developed into what was known as the Stadtbahn in the 30s and 40s.

The first service to go into operation was the U1 in 1978. Since then the entire network has been extended and expanded into five different routes and currently carries well over a million passengers every day.

All of the lines run through the inner centre of Vienna apart from the U6, which runs just to the west of the centre.

There is no U5 because the original proposals called for a route which has been partly used by the extension to the U2. Plans have been put forward to create a new U5 through new construction and extensions and changes to the U2. However these have not been approved.

Tickets are part of the Wiener Linien system which are also valid on the buses, trams and S-Bahn. As in many other cities in Europe, the tickets must be validated before use - in Vienna this is done by pushing them into one of the blue ticket stamping boxes at the stations or on a bus or train.

There are many different types of ticket - the Vienna U-Bahn system publishes a useful booklet giving all the options. Those staying longer may wish to look into getting the 72-hour Vienna Card, which gives free travel on all city public transport as well as various reductions to museums, galleries, etc.

One unusual feature of Vienna is that tickets for concerts and sporting events sometimes include free public transport - check on purchase to see if this is the case. Children under six years of age travel free.

Tickets can also be bought via mobile phones and online, although a good command of the German language is possibly advisable for this...