The Museum of Military History, known in German as the Heeresgeschichtliches Museum, is one of four barracks which were built around Vienna following the unrest which was sweeping Europe in the mid-1880s.

Its predecessor had actually been destroyed in the rebellion of 1848.

This particular barracks complex, the Arsenal, was constructed in the 3rd district of Landstrasse and finally finished in 1856. 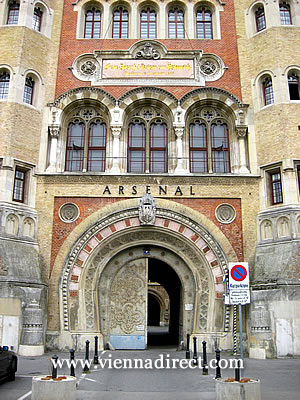 Following an architectural competition for the contract to design the complex, the winners were the architects who were later responsible for the Vienna Ringstrasse.

The contract wasn't however only for strictly military purposes, barracks and weapons storage, for example. The Emperor at that time, Franz Joseph I, ordered that one building should be used as Vienna’s first purpose-built museum, designed to portray the history and the triumphs of the Imperial Army.

The Museum is located on the south side of the Gürtel next to the Schweizergarten and displays the history of the Habsburg Empire from the 16th century to 1918 and also Austria’s military history from the demise of the Monarchy to the Second Republic in 1955.

The museum building is situated in the middle of the Arsenal complex. The entrance hall is deliberately designed to be imposing, with life-size statues of arms commanders lining the way through to the staircase.

Around the Museum there is plenty to see and the exhibits can be viewed in chronological order dating from the siege of the Turks. If choosing this option one of the first to be seen is a Turkish standard which was captured during the siege of the city in the 17th century.

More modern exhibits are also not without interest. The incident which precipitated the First World War - the assassination of Archduke Franz Ferdinand - is illustrated by the car in which he was travelling when he was killed. There is also a famous painting depicting modern warfare "To The Unknown Soldier" which was finished in 1916 by Tyrolean artist and serving war painter Albin Egger-Lienz.

With the map of Vienna and the museum below, you can zoom in or out or move in all directions by using the controls to the right. And the buttons on the top left switch between a traditional map view, a satellite view and a mixture of the two.