Vienna's parks tend to be stately or grand or historic or landscaped, like the gardens of Schönbrunn Palace or the previously formal area of Schwarzenberg Park.

So it may seem odd to pick out a tiny garden area which has been created entirely with another culture in mind. 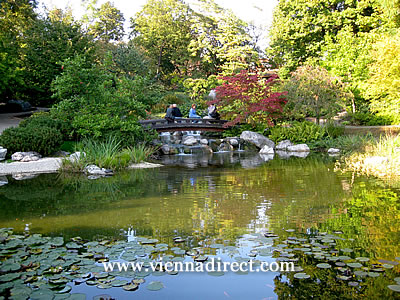 But this Japanese garden is a small and peaceful area situated right next to a retirement home at the corner of two busy streets, Hohe Warte and Barawitzkagasse, in the 19th district of Döbling.

The Setagaya park is not located that close to the city center and the visitor needs to take the U4 subway all the way to the end station of Heiligenstadt to get there, but it is a nice place to relax after a long day of sightseeing in Vienna.

The district of Döbling is twinned with the Tokyo district of Setagaya and the park was proposed in 1992 as part of the cultural exchanges between the two city suburbs. It was designed by landscape gardener Ken Nakajima.

Near the entrance to the park a stone engraved with the word Furomon can be seen. This is a poetic Japanese expression which literally means "ageless gate".

The park is designed to symbolise a Japanese landscape and so it contains symbolic features that Western culture associates with a garden from that area: a spring, a waterfall, stones, a pool and densely-cultivated plants and trees typical of Japan.

The park is set on several levels leading to the bamboo gate which is designed as a homage to the one in the Shugakuin Palace Gardens.

There is also a Japanese teahouse and a stone pagoda, as well as several in the 4,000 square metres which the park covers.

With the map of Vienna and the gardens below, you can zoom in or out or move in all directions by using the controls to the left. And the buttons on the top right switch between a traditional map view, a satellite view and a mixture of the two.