Although the Prater, from the Latin 'pratum' meaning meadow, is actually the name of a large park area between the Danube and the city centre offering all sorts of attractions, for many people it is first and foremost the 'Riesenrad' or Giant Ferris Wheel.

The park itself has been a favourite spot to relax since it was opened to the public in 1766 by Joseph II, much to the displeasure it has to be said of the local aristocracy who prior to that had had the imperial parkland all to themselves. 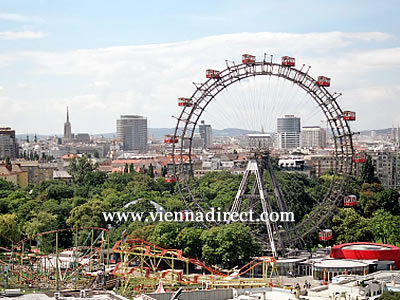 The wheel came much later (1897) and was built to celebrate the Golden Jubilee of Franz Josef I by the English engineer Walter Bassett.

At the time other similar wheels existed in Blackpool, London, Paris and Chicago but all but the Vienna wheel have long since been demolished. The Vienna wheel was also due for demolition in 1916, but due to the turbulent times they couldn't raise enough money for the process so it was left standing.

It was damaged by fire in 1944 but such was the fondness of the Viennese for their wheel that it was one of the first attractions to be rebuilt after the war, re-opening for business in 1947. The only real difference in the before/after is that the number of red cabins was reduced from 30 to 15 for safety reasons.

The wheel is as much a symbol of Vienna as the St. Stephan's Cathedral and its popularity was extended worldwide when it was featured in the 1949 film The Third Man with Orson Wells.

Take a ride for a leisurely look over the rooftops of Vienna, 10 minutes to go around, or use the opportunity to celebrate a special occasion and hire out one the luxury cabins for the evening.

Best not to follow the example of some of the previous exhibitionists however e.g. riding horseback on the roof of a cabin or hanging outside attached by a rope!

With the map of Vienna and the Prater below, you can zoom in or out or move in all directions by using the controls to the left. And the buttons on the top right switch between a traditional map view, a satellite view and a mixture of the two.