Think of ringroads and you probably think of flyovers, traffic, junctions, but not in Vienna...

Here the 'Ring' is 4 miles of sheer extravagance built at the end of the 19th C. along the route of the former city fortifications, demolished according to the wishes of Emperor Franz Josef.

Nowadays you find one major sight after another and you have to be careful how you visit it as if you choose the tram or one of the hop-on/hop-off buses for example, then you might feel you're at a tennis match with eyes-left/eyes-right all the way round. 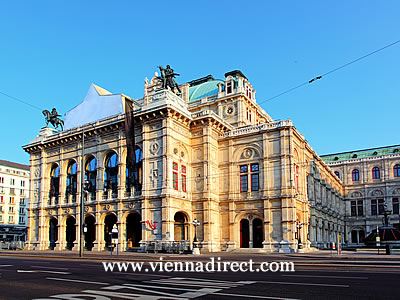 If you have the time and the energy and don't necessarily want to view anything in great detail, then walking the Ringstrasse is a better option.

The Opera was the first building of importance to be completed so it's a good  place to start. Head off in a clockwise direction and after the statues to Goethe (R.) and Schiller (L.) you'll come to the gardens of the Imperial Palace (R.), with the statue of Mozart, and after that the Palace Gate leading into the Hofburg complex (both R.).

Opposite the gate you have the almost mirror images of the Natural History and Fine Art Museums, with the Empress Maria Theresia between them, and around the corner you have the beautiful Greek style Parliament with Athena outside (L.) and next door the equally impressive neo-Gothic Town Hall.

On the right you'll have passed the Volksgarten – people's garden – famous for its roses (R.), the Burgtheater – National Theatre – and one of Vienna's famous coffee houses, the Landtmann.

Next of interest is the University (L.) and as you carry on around the bend, look off to the left to see the delicate spires of the Votivkirche. Now on the 'Schottenring' you'll come to the former stock exchange (R.) and the former military barracks (L.) before reaching the Danube Canal.

Go along the canal as far as the Observatory and turn right back onto the Ring and go past the war museum and the statue to General Radetzky (L.) and onto the Stadtpark – city park – with the statue of Johann Strauss and voilà, you're almost there, back at the opera!

With the map of Vienna and the Ringstrasse below, you can zoom in or out or move in all directions by using the controls to the left. And the buttons on the top right switch between a traditional map view, a satellite view and a mixture of the two.