The Austrians' fascination with death takes its roots in the Germanic tradition of funeral and burial rituals.

Death as a part of life is present in popular songs, poetry and speeches at funerals today, as it was more than two centuries ago. 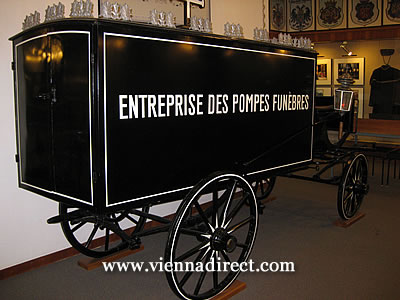 When the Austro-Hungarian Empire was at its peak people paid heavily to make sure they would be remembered. Their obsession with a "schöne Leiche" (a beautiful corpse), embalmed for the memorial service, prompted them to save money to ensure their send off was as grand as possible.

In Vienna in the 1900s more than eighty private funeral companies competed for the business of burying the city’s citizens in one of the 52 cemeteries in the suburban area.

In 1951 the Bestattung Wien, or Undertaking Service of Vienna, was appointed as the only funeral company in the city. Originally located in the 4th district near the Schloss Belvedere and now moved out to the Central Cemetery, it also houses the intriguing Vienna Undertakers' Museum (sometimes called the 'Funeral Museum'), which contains more than 600 artifacts documenting the Viennese interest in death and burial.

There are elaborate black uniforms and regalia worn by the pallbearers, or Pompfüneberer, from the French pompes funèbres, as well as hearses, wreathes, sashes, lanterns, torches, black flags, even an urn in the shape of a football, a “sitting coffin” inspired by Magritte, and an old pack of undertaker’s cigarettes carrying the words "Rauchen sichert Arbeitsplätze", which means: "Smoking protects jobs…"

A real curiosity on display in the Bestattungsmuseum is the re-usable coffin instigated in 1784 by Emperor Josef II, in an attempt to save wood and to hasten decomposition. The coffins were equipped with a trap underneath to drop the bodies in the graves and kept for another funeral. But the Viennese protests led to the cancellation of the law within six months.

Another curiosity is a device whereby a cord attached to the hand of the deceased would ring a bell above ground if he came back to life. To avoid this, some Viennese stipulated in their will that after death they should be stabbed in the heart with a sword. To this day the city’s hospital is still occasionally instructed to administer a lethal injection after death to avoid premature burial. And less than 20% of the predominantly Catholic Viennese choose cremation, the rest hoping for a schöne Leiche.

With the coming of the European Union Vienna’s funeral business has been once again opened to competition, but the Bestattung Wien still provides more than 10,000 burials and cremations, and produces over 25,000 coffins for the Austrian market every year.

With the map of Vienna and the Vienna Funeral Museum below, you can zoom in or out or move in all directions by using the controls to the left. And the buttons on the top right switch between a traditional map view, a satellite view and a mixture of the two.