Schönbrunn Palace is the best-known connection of the occupation of Vienna by Napoleon in the early 19th century.

Vienna was occupied twice by the French Emperor.

In 1805 a treaty of friendship and co-operation was signed at the palace.

In 1809 he quartered himself in Schönbrunn again - feeling so confident that he ordered opera to be performed and held regular parades for his inspection.

Other lesser-known sites still exist around Vienna, however, with a more military relevance. 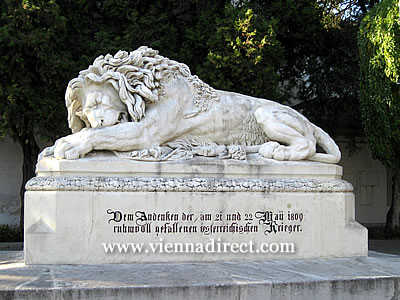 In 1809 Napoleon suffered his first big defeat at the Battle of Aspern, on the other side of the Danube.

Two centuries later, there is nothing left of Napoleon’s headquarters, but it is still interesting to discover the historical site of the military installation.

Situated in the area known today as the 22nd district of Donaustadt, the headquarters’ former location is indicated by a stone obelisk at the end of Napoleonstrasse, a small dirt road that runs through the wooded region of Lobau.

As he walks in the peaceful forest the visitor can imagine what it was like when thousands of French soldiers were gathered in the camp base after combat and prepared the horses and the artillery for the next battle.

Heading further north to Aspern, at Asperner Heldenplatz, the visitor can find a small museum next to a church devoted to the Battle of Aspern, as well as the former location of Napoleon’s Pulvermagazin, the powder magazine, and the Franzosenfriedhof, the French cemetery, each marked by a stone obelisk.

There is an impressive stone lion in front of the church sculpted by Anton Dominik Fernkorn to commemorate the battle.

And, closer to the Danube, at the corner of Praterstrasse and Zirkusgasse, there is a cannonball embedded in the front wall of an orange building with the date “1809” inscribed underneath it.

Napoleon decisively defeated the Austrians six weeks later at the Battle of Wagram and Emperor Franz II agreed to his request for the hand of his own daughter, Archduchess Maria Louisa. The princess went to Paris to join her future husband and Austria avoided more trouble with Napoleon.

The capital city eventually became the setting for the Congress of Vienna in 1814 following Napoleon’s defeat at the Battle of Leipzig and his exile to the island of Elba from which he escaped less than a year later to return to France.

With the map of Vienna and the Lobau below, you can zoom in or out or move in all directions by using the controls to the left. And the buttons on the top right switch between a traditional map view, a satellite view and a mixture of the two.