Those who are interested in how things work should make tracks for one of the largest and most interesting museums in Vienna . the Technisches Museum or, in Engish, the Museum of Technology.

Located in the 14th district of Penzing on Mariahilfer Strasse, right across the street from the Auer-Welsbach-Park and next to the U4 Schönbrunn station, the museum has thousands of displays from every branch of technology. 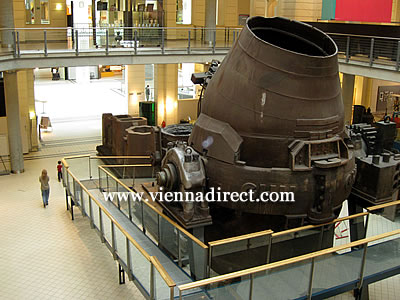 There are so many things to see and so many scientific experiments to try that the enthusiastic visitor might not have enough of one day to go through the four floors of the museum.

From giant steam engines to old-fashion hair blowers, from ancient musical instruments to massive models of boats, or from outdated washing machines to full-size airplanes, the Technisches Museum has acquired all kinds of objects and devices from the past during the last century. Science, physics, astronomy, energy, environment, urban planning, engineering, transports, electronics, design, everything linked to technology is presented, explained and demonstrated.

There are several films, numerous interactive experiments, and even a real TV studio where you can become an anchorman; all of which illustrate the impact of the technological developments on our everyday life.

Many of the objects in the Technisches Museum also reflect Austria’s contribution to the development of modern technology.

The displays range from the early 19th century through to the modern day. The older sections of the collections actually date from items which were originally collected by the Hapsburg rulers of the Empire, while the ones from the 20th and 21st centuries look at technological development in both industrial usage and consumer items (for example, an early stationary fitness bike from the 1950s).

With the map of Vienna and the Museum of Technology below, you can zoom in or out or move in all directions by using the controls to the left. And the buttons on the top right switch between a traditional map view, a satellite view and a mixture of the two.