The Austrian Postal Savings Bank - the Österreichische Postsparkasse - is headquartered in one of the the buildings created by the famous architect Otto Wagner.

Viennese bank director Georg Coch had studied the banking systems in other European countries and in 1883 introduced a revolutionary system for Austria that would become the standard for payment transactions all across the world: Scheckverkehr, or cashless transfers. 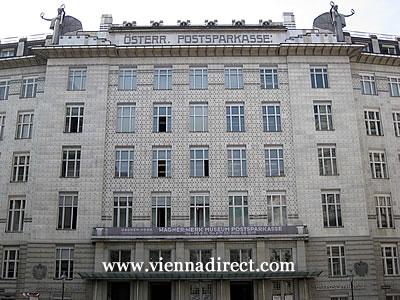 With a simple written instruction, the debit of one account and the credit to another would be authorized.

Within a few weeks, 200,000 customers had signed up and the Austrian Postal Savings Bank became one of the most important banks of the Austro-Hungarian Empire.

In 1903 the renowned architect Otto Wagner presented plans for the new headquarters of the Postsparkasse that would mirror the bank’s modern procedures.

Moving away from the usual style in Vienna, Wagner planned a building that used the flowing structures of the new Jugendstil, or Art Nouveau, movement.

Located in the back of the Georg-Coch-Platz, in the 1st district Innere Stadt, the Österreichische Postsparkasse occupies an entire block, but often goes unnoticed by most passers-by on the Ringstrasse because it is partially hidden.

At first glance, the massive eight-storey building with its reinforced concrete structure and marble coating attached to the walls by aluminum bolts give the bank a solid appearance, which was apparently Wagner’s intention.

It is said that the architect wanted to convey a sense of security to the customers, making them feel like their money was safe just by looking at the building.

The facade is covered with these aluminum rivets but they don’t mask the clear lines. In fact, they are decorative elements that give the bank its cool and simple elegance. On the upper part of the exterior, there are more elaborate decorations, like the statues of angels holding laurels in their hands.

After going through the main door and climbing up the flight of stairs of the rather dark lobby, it is somewhat surprising to see all the natural light coming through the curved frosted-glass ceiling and illuminating the grand Kassenhalle. Even the floor is made of ultra-thick glass tiles, allowing the daylight to reach the floor below, where the mail sorting rooms are located.

The decoration is kept to a minimum, putting all the emphasis on the structure, the colossal iron columns that support the roof and the polished steel furniture. The bank also houses a small but interesting museum devoted to its creator, Otto Wagner.

With the map of Vienna and the Österreichische Postsparkasse below, you can zoom in or out or move in all directions by using the controls to the left. And the buttons on the top right switch between a traditional map view, a satellite view and a mixture of the two.

Details of the Otto Wagner Museum

The museum is closed on Mondays and bank holidays and over the Christmas period.