In the 19th century, Vienna’s suburbs started to develop rapidly as tens of thousands of immigrants came to live in the city.

The 13th district of Hietzing became an attractive address, more so than most neighborhoods, because of the proximity to the Habsburgs’ summer residence at Schönbrunn. 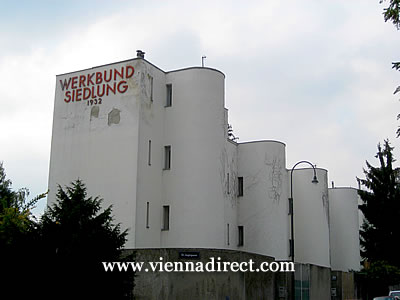 Today there are many beautiful villas in the area, designed by some of Vienna’s most prominent architects.

However, something completely different is situated at the top of a hill between Jagdschlossgasse and Veitingergasse: the housing estate known as the Werkbundsiedlung.

Founded in Germany in 1907 the Deutscher Werkbund, or German Work Federation, was an association of architects, designers, and industrialists interested in modern architecture and industrial design; an influential group that later became important in the creation of the Bauhaus school of design.

In 1930 Vienna’s socialist city council organized a Werkbund Housing Exhibition and invited a group of modernist architects to design and build an affordable, two-bedroom family house in a small space. The city officials were hoping that the new homes would provide an inventive alternative to the enormous housing blocks constructed in the 1920s, like for example the Karl-Marx-Hof.

And one of the impulses for this development in Vienna was the construction of the similar Weissenhofsiedlung in Stuttgart a few years earlier.

The estate has been planned to be built on a flat area in another part of the Viennese suburbs, but eventually it was developed in a hilly part of the countryside, which meant that development costs for what were meant to be affordable family homes shot up. For example, it was necessary to create special foundations and cellars for the buildings, which hadn't previously been planned for.

Some of the buildings were sold, but most were taken over by the Vienna City Council shortly before the Second World War and used as rental accommodation. Four of the houses were destroyed during the war but the rest are still inhabited and were renovated in the 1980s.

The current buildings appear to once again require renovation but a planned refurbishment for the area is made more problematic by the fact that some of them are now in private hands.

There is a small information center in the Woinovichgasse which displays plans and models from the original architects.

With the map of Vienna and the Werkbundsiedlung below, you can zoom in or out or move in all directions by using the controls to the left. And the buttons on the top right switch between a traditional map view, a satellite view and a mixture of the two.