Cemetery of the Nameless

Many tourists who come to Vienna visit the Zentralfriedhof, the Central Cemetery, which is the city’s largest and most famous cemetery where "personalities" such as Ludwig Van Beethoven, Johannes Brahms, Franz Schubert, Johan Strauss and more modern celebrities like pop star Falco are buried.

But among the 55 cemeteries in Vienna, one of the most touching and unusual has to be the Friedhof Der Namenlosen, the Cemetery of the Nameless. 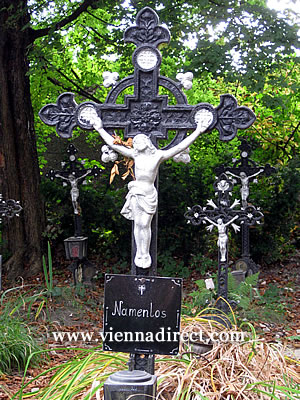 Although it is considered to be part of the 11th district of Simmering, the cemetery is quite far from the center of Vienna and the fact that it is rather difficult to get there makes the trip feel like a pilgrimage.

Located nearby the junction of the Danube Canal and the Danube itself, the Friedhof Der Namenlosen is hidden behind gigantic grain warehouses and equally enormous silos.

The cemetery used to be little visited, especially since all of the 104 bodies were buried there before 1940. (After 1940 the victims of the river were buried in the Central Cemetery.)

Most of the corpses are unidentified victims of drowning which the river's current brought ashore. However the inclusion of the romantic and sad setting in the popular film "Before Sunrise" has meant that fans of the film often make a trip out to this spot.

The dead people were buried in wooden coffins, which were donated by a carpenter's workshop. Forty-two of them were eventually identified by family members but the final resting places of most consist only of a bundle of mournful flowers and a simple black steel cross, adorned with the inscription "namenlos" ("unknown" or "nameless").

River improvements have meant that there are no more eddies to bring the dead bodies ashore near the cemetery, but still every year on All Saint’s Day (November 1) the nameless are remembered. Some fishermen from the Albern area keep an old tradition alive by building a raft decorated with flowers and bearing a commemorative inscription for the victims of the Danube.

The raft is then floated on the river while a band plays and then left to follow the slow currents downstream - in a similar way to which the bodies of the nameless originally arrived.

With the map of Vienna and the Cemetery of the Nameless below, you can zoom in or out or move in all directions by using the controls to the left. And the buttons on the top right switch between a traditional map view, a satellite view and a mixture of the two.