During World War II, the German army built many Flaktürme. These anti-aircraft flak towers were used by the Luftwaffe to help protect the cities such as Berlin, Hamburg and Vienna.

While most of them were demolished after the war in Germany, the six flak towers built in Vienna are still standing. 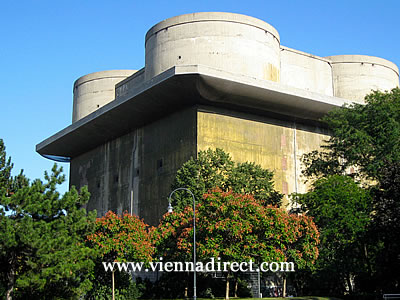 One is located within a military base of the Austrian Army, one has become an aquarium, the Haus des Meeres, and several projects are considered for the others. In 1995 most of the MAK Collection of Contemporary Art moved to the Flakturm VIII G-Tower in Arenbergpark, just a couple of minutes away from the Rochusgasse U-Bahn station.

At first sight, the Arenbergpark with its huge trees spread across the lawn, abundant colorful flowers, classic park benches and the kindergarten buzzing with children’s screams and laughter, looks like most parks in Vienna. But there is one small difference: two gigantic flak towers, rising over the trees, dominate the scenery. The L-Tower (Leitturm or Lead Tower), situated at one end of the park, had been planned to be used as a datacentre for an IT firm.

At the other end, the G-Tower (Gefechtsturm or Combat Tower) was once home to one of the most interesting collection of contemporary art in the city.

Although the G-Tower is still used as a storage facility by MAK it is no longer open to the public. Both have been closed for unspecified health and safety reasons since 2011 and no budget has been found to bring them up to a standard which would enable visits once again.

With the map of Vienna and the flak towers below, you can zoom in or out or move in all directions by using the controls to the left. And the buttons on the top right switch between a traditional map view, a satellite view and a mixture of the two.