At the end of the 19th century the gas supply for the city of Vienna was controlled by private corporations and the prices were kept pretty high for the consumers, the majority of them being families with modest incomes.

All that changed when the Gaswerks Simmering, or Simmering Gas Works, were built. 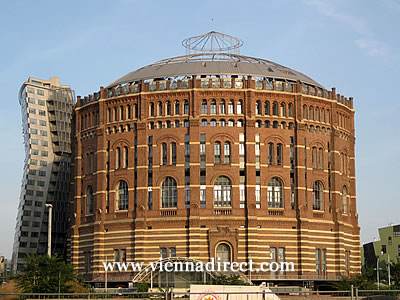 Located in the 11th district on Guglgasse, the first municipal gas storage tanks, with their impressive 55 meter-high brick walls, had the capacity to provide gas to a large part of the population. The inside walls of these four huge containers were made of iron in order to store the inflammable gas produced from hard coal.

The level of gas in the tanks would vary depending on the demand and it was sent to Viennese homes through a pipeline system that was spreading around town for hundreds of kilometers. Although by definition a gasometer is the circular gauge outside of the tank, the word was commonly used to call the containers themselves and still is today.

Even if the Simmering Works could provide over 100 million cubic meters of gas annually, the gasometers ended up not being able to supply completely the ever-growing population of Vienna.

After being upgraded several times to keep up with modern technologies, the gas production stopped in 1969, after the city began its conversion from coal gas to natural gas. But the tanks were still used for gas storage until 1984 when they finally closed due to new technologies in gasometer construction.

In 2001, four internationally renowned architects were each given a tank (Gasometer A, B, C, D) with the task of reinventing them.

Jean Nouvel made an indoor plaza with Gasometer A, with huge windows to catch the light coming in from the transparent dome.

Coop Himmelb(l)au produced a 22-storey building with a bending-shape attached to Gasometer B, creating a remarkable contrast with the circular shape of the container.

Manfred Wehdorn made an eco-friendly apartment building with indoor gardens in Gasometer C.

And Whilelm Holzbauer ended up constructing an apartment building as well in Gasometer D, after he saw his project for a hotel rejected by the city.

Gasometer City has its own U-Bahn station, outside which there is a huge gas valve. It also contains a large shopping mall, 615 apartments with 1500 residents, offices, a media center, as well as the Wiener Stadt und Landesarchiv, the Vienna City and County Archives.

An interesting note: Gasometer City served as a set for the James Bond movie, The Living Daylights.

With the map of Vienna and the gasworks below, you can zoom in or out or move in all directions by using the controls to the left. And the buttons on the top right switch between a traditional map view, a satellite view and a mixture of the two.