At the end of the First World War in 1918, the Habsburg Empire was dismantled, Austria was amputated from the better part of its territory and the economy suffered tremendously from this loss. 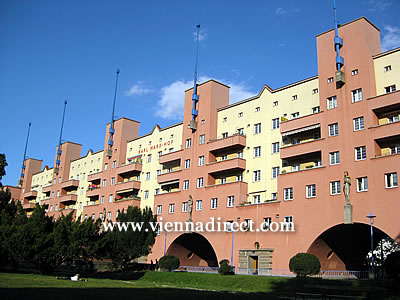 At the time, more than 250 000 workers lived in old jam-packed apartment buildings with no running water.

The situation had reached a critical point and the election of the Social Democrats in 1919 marked the beginning of a new era. The so-called Rotes Wien, or Red Vienna, administration launched an intensive program of social reform in the twenties and early thirties, including the extensive re-housing of the population in almost 400 new municipal apartment complexes named Gemeindebauten.

Some of these buildings were huge structures that resembled fortresses for the worker families, but none of them embodied more the socialist ideology than the architectural flagship that is Karl Marx-Hof.

Built between 1927 and 1930 by city planner Karl Ehn, a pupil of the renowned architect Otto Wagner, the colossal building with its 1,382 apartments was designed to welcome thousands of Viennese in the 19th district, on the aptly nicknamed Ringstrasse des Proletariats, the Ringroad of the Proletariat.

Situated at the end of the U4 metro line in Heiligenstadt, a neighborhood of Döbling, the imposing building is over one kilometer long and contains laundries, kindergartens, pools, stores, a clinic, a pharmacy and a post office. There is a huge courtyard behind the tenement and the view from the park is even more impressive, especially at the end of the day when the setting sun hits the building.

Karl Marx-Hof also has a rich history. In the early thirties, the Socialist movement was becoming weaker due to the Great Depression and the rise of a national fascism that ultimately led to a three-day civil war, the Österreichischer Bürgerkrieg.

Complaints were made that the Karl-Marx-Hof had been deliberately constructed in a previously "wealthy" (and conservative) area. And rumours were spread that there were arms depots within the building.

During the Februaraufstand, the February Uprising, some of the people engaged in the revolt barricaded themselves inside Karl Marx-Hof but were forced to surrender after the Austrian army and paramilitary forces shelled the building which was still inhabited by women and children.

The heavy artillery damage to the building was repaired in the 1950s and then it was restored again between 1989 and 1992. Right across the street from Karl Marx-Hof is the location of the 12. Februar-Platz, a reminder of these troubled times.

With the map of Vienna and the Karl Marx-Hof below, you can zoom in or out or move in all directions by using the controls to the left. And the buttons on the top right switch between a traditional map view, a satellite view and a mixture of the two.