By the turn of the 20th century Otto Wagner had established himself as one of the most important and influential architects in Vienna.

He was the man behind some of the city’s most distinctive buildings, including sumptuous villas, beautiful apartments overlooking the Naschmarkt, stylish railway stations and a colossal bank, the Postsparkasse.

He had a real gift for presenting functional features in whatever decorative style happened to be popular at the time, although he fully embraced the European Art Nouveau style, known as Jugendstil, as he got older. 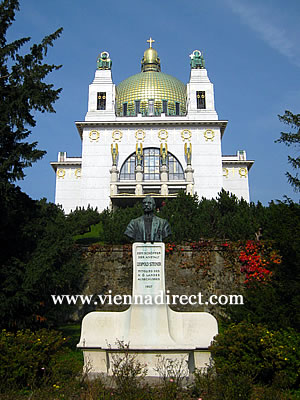 His last commissioned work was the spectacular Church of St. Leopold in the 14th district of Penzing on the very outskirts of Vienna. It is better known as the Kirche am Steinhof - the name refers to the ground on which is built. When it was designed at the start of the 20th century it was part of what was the largest and most modern psychiatric institution in Europe.

It was seen as ironic at the time that the finest building of the "Seccessionist" Austrian architectural movement had been built for psychiatric patients and the design was particularly disapproved of by Austria's ruling family, who gave Wagner no more commissions in the future.

Wagner had used new construction techniques and combined them with the necessities of the patients who would be using the church. The seating, for example, was designed so that there were no sharp edges. And the font was designed to drip to minimise the risk of infection.

Outside, the most striking feature is the golden dome, which was covered with two kilograms of gold plate over the copper roof as part of a structural renovation in 2006. It can be seen from afar and the reflections of the sun off the roof have given rise to the Viennese nickname for the hill on which it stands: the Limoniberg, or "lemon mountain".

Another member of the Vienna Secessionists, Koloman Moser, was responsible for the stained glass windows. These were taken to the Czech Republic for safe keeping in the Second World War and eventually returned to the church in the 1950s.

The church is normally closed to visitors apart from regular services or during special guided tours, which take place on Saturday afternoons. There is also an hour on early evenings on Saturdays when the church is open to the public. Another guided tour is available on Fridays which covers the whole of the Limoniberg.

With the map of Vienna and the church below, you can zoom in or out or move in all directions by using the controls to the left. And the buttons on the top right switch between a traditional map view, a satellite view and a mixture of the two.