The gigantic Rossau Barracks are the headquarters of Austria's Ministry of Defence.

But the Kaserne ("barracks") is also a historic reminder of the 19th century architecture and the turmoil in the middle of that century. 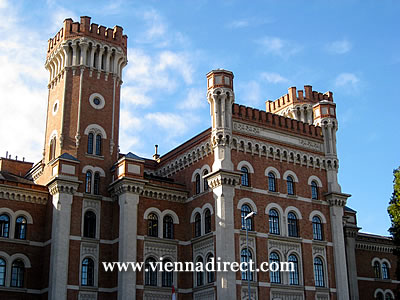 Like the Arsenal, it was built following the revolts of 1848 to protect the inner city from the workers who lived in the suburbs. It was then known as the Kronprinz-Rudolf-Kaserne.

It is a huge red-brick building located in the 9th district of Alsergrund, and occupies much of Maria-Theresien-Strasse. In its heyday it could quarter 2,400 soldiers and nearly 400 horses.

There used to be a second barracks where the Postsparkasse now stands in Georg-Coch-Platz. The two were connected by the Ringstrasse ring road.

The building has had plenty of varied uses - part of it has been used as apartments for the homeless, part was a garage and part for a museum for a renowned Austrian infantry regiment. It was then handed over the Vienna police after the Second World War, who now share it with the Ministry of Defence and Sport and part of the Vienna City Council.

According to Viennese myth, the architect forgot to put toilets in the building and was so ashamed that he committed suicide once he discovered his mistake. In fact, there were toilets in the barracks from the very beginning, in the towers of the two outer courtyards. But additional toilets had to be built later, which caused significant costs and trouble.

With the map of Vienna and the Rossauer Kaserne below, you can zoom in or out or move in all directions by using the controls to the left. And the buttons on the top right switch between a traditional map view, a satellite view and a mixture of the two.