The first Imperial Furniture Inspector was appointed in 1747 by Maria Theresa, the wife of Emperor Franz I.

It was his job to catalogue the vast Imperial property and furniture from the many Hapsburg proprieties.

Soon after the responsibilities were increased to make the official responsible for the purchase of new items to decorate the various Imperial rooms. 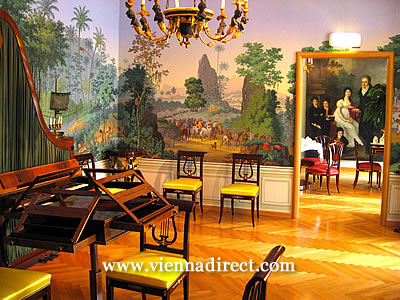 Since fashions - and indeed Emperors and their consorts - changed frequently, the Furniture Directorate was left with a large amount of "spare" (and outdated) furnishings and equipment which had to be stored somewhere.

In 1901 Emperor Franz Josef I commissioned the present storage facility. Once the Republic had been declared following the end of the First World War, the giant collection of valuable items and a whole heap of historic junk passed into the hands of the new Austrian government. They decided to open the collection to the public and the renamed Kaiserliches Hofmobiliendepot, or Imperial Court Furniture Depot, was opened in 1924.

The current musum is located at the bustling Mariahilferstrasse in the 7th district of Neubau. It was redesigned, extended and reopened in 1998.

Some of the exhibits show the pomp of the Empire in its glory, for example, the Egyptian Cabinet which was ordered by Empress Maria Ludovica in the days of Napoleon.

But just as fascinating are the more personal and intimate items - if you ever wanted to know how Emperors went to the toilet, the Furniture Depot will show you a collection of commodes. Or, if that isn't to your taste, you may prefer another collection of spittoons for deposits of the Imperial tobacco-chewing.

The moves from one palace to another were important since, at least in the earlier days of Empire, the palaces were not permanently furnished. To help with this, a range of Imperial folding chairs were developed which could be packed up and used for special events.

The Furniture Depot still has a role in present-day government as well - some of the possessions are used to decorate the offices of the Austrian President.

With the map of Vienna and the Imperial Furniture Collection below, you can zoom in or out or move in all directions by using the controls to the left. And the buttons on the top right switch between a traditional map view, a satellite view and a mixture of the two.

The Imperial Furniture Collection is closed on Mondays and open every other day from 10.00-18.00.