Upon arriving in the courtyards of the University of Vienna campus the first-time visitor might find it difficult to imagine that this place was once a hospital.

There is a big park where children are playing, many cafés, restaurants and a beer garden, located right at the entrance, which makes it then hard to believe that students actually study in this pleasant environment since it seems to be the perfect place for relaxing. 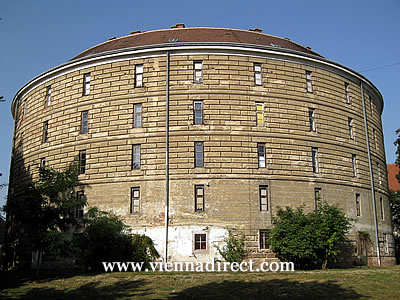 But when the visitor ventures a little further into the campus, he notices all these buildings where students lead serious scientific researches, the same way doctors and scientists conducted their experiments inside these walls a couple of centuries ago.

And by the time the visitor reaches the end of the courtyards and discovers this strange-looking circular tower it becomes obvious that this place was no ordinary hospital.

Located in the 9th district, just off Sensengasse, the Altes Allgemeines Krankenhaus, or Old General Hospital, was officially founded by Emperor Josef II in 1784 after the buildings had been used for more than 60 years as a poorhouse.

During the following decades several extensions to the pavilions already built were added and the hospital was then one of the most modern in Europe and boasted over 2000 beds.

In the 19th and 20th centuries many world famous doctors, surgeons and scientists worked in the laboratories of the hospital, including psychiatrist Julius Wagner-Jauregg, the Nobel Prize for Medicine winner in 1927, and biologist Karl Landsteiner, the creator of the modern system of classification for the groups of blood types.

An important addition to the hospital was the austere building that is the Narrenturm, or Fools’ Tower.

Constructed in 1784 by court architect Isidor Canevale, the cylindrical tower was the first asylum where the so-called insane were housed and treated, rather than being mistreated by relatives or put on display like animals.

The building consisted of 5 floors with 28 centrally heated cells and a central courtyard from where the doctors could supervise the patients. With its revolutionary classicist style, the tower was soon nicknamed the Guglhupf after a famous Austrian cake with a ring shape.

Today, the Narrenturm is home to the Pathologisches-Anatomisches Bundesmuseum, or Vienna Pathological-Anatomical Museum. The museum owns a fascinating yet gruesome collection of over 4000 specimens of physical abnormalities and deformities preserved in formaldehyde and also imitations of body parts made out of paraffin wax. As grisly as it may sound this place is worth a look.

With the map of Vienna and the Narrenturm below, you can zoom in or out or move in all directions by using the controls to the left. And the buttons on the top right switch between a traditional map view, a satellite view and a mixture of the two.

The museum is open for differing hours on Wednesdays, Thursdays and Saturdays and is closed on public holidays.