On the outskirts of the city at the edge of the Wienerwald, is a church surrounded by nature but which seems more like an abstract sculpture than a sacred place.

Located in the 23rd district of Liesing, on the corner of Rysergasse and Georgengasse, the Kirche Zur Heiligsten Dreifaltigkeit, or the Church of the Holy Trinity, stands on a small hill named Sankt Georgenberg, looking down on Vienna. 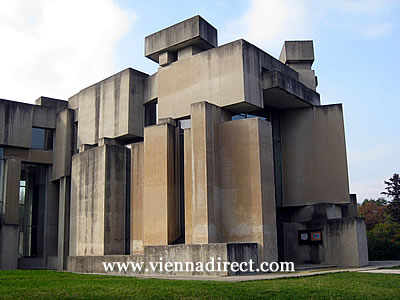 The church is composed of 152 giant concrete blocks of different sizes, weighing between 2 and 140 tons, superimposed over each other like Lego blocks. The apparent chaos of the asymmetrical blocks is intended to create a contrast with the harmonious whole of the surprisingly large space inside the building, which can accommodate 250 people at once. The narrow vertical glass panes let some of the daylight in, providing a peaceful place for worship.

The church, better known as the Wotruba Kirche, was built according to the plans of its creator, Fritz Wotruba.

One of the most important and influential sculptors of the 20th century in Austria, Wotruba began his career as a figurative artist, representing human beings in a realistic way.

He sculptured various monuments for public places in Vienna, like “Man, condemn war”, in the front lawn of the Belvedere, or statues for museums, like “The Lying Adolescent”, exhibited at the Albertina Museum.

In the 1950s he became interested in geometrical abstraction and started using cubic shapes as the basic structure of his creation.

The Kirche zur Heiligsten Dreifaltigkeit is considered by most art critics to be his ultimate artistic achievement.

When it was finished in 1976, few people shared the critics’ enthusiasm. The unusual appearance of the building provoked a storm of protest in the local population of Vienna-Mauer who found it inappropriate for a temple dedicated to God.

But the perfect setting and the somewhat unique aspect of the church, designed like a work of art in which you can enter, finally won them over and it is now the pride of the community.

Wotruba had found his inspiration during a visit to the French city of Chartres, a place that embodied the essence of modern Europe to him, and started working on the plans in 1967. Unfortunately the sculptor died in 1975, before the completion of the church. His collaborator, the architect Fritz G. Mayr, finished the work, thus achieving his vision of a temple to God in today’s modern world.

With the map of Vienna and the Wotruba Kirche below, you can zoom in or out or move in all directions by using the controls to the left. And the buttons on the top right switch between a traditional map view, a satellite view and a mixture of the two.