In 1891, Sigmund Freud established his medical practice in Vienna at Berggasse 19, in the 9th district of Alsergrund.

He conducted his analyses in this second-floor house where he developed the theories that fundamentally changed the understanding of the human psyche. 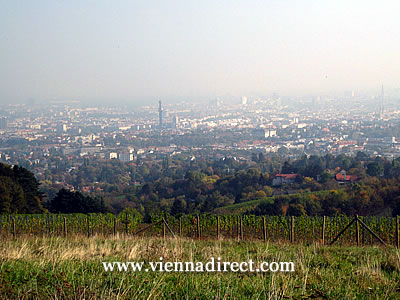 Freud instigated the analysis of dreams as a way of exposing implicit meanings that proved to be helpful to understand better patients’ troubled minds. His book “The Interpretation of Dreams”, published in 1900, is considered a classic and Freud is known around the world as the father of psychoanalysis.

It is no surprise then that his practice has become a museum, visited by thousands of tourists every year. But what few people know is that it wasn’t the only place where he found his inspiration for his theories.

On Sundays, like many Viennese, Freud put on his walking clothes and went to the the Vienna Woods (Wienerwald). Of course, unlike the rest of the walkers, Freud was perhaps pondering over his concepts of sexuality and hysteria.

His favorite place in the woods was the Bellevue-Höhe, a peaceful hill from which he could see the whole city of Vienna.

One day he wrote to a friend the following: “Letter to Wilhelm Fliess. Do you suppose that someday a marble tablet will be placed on the house inscribed with these words: In this house on July 24th 1895 the secret of dreams was revealed to Dr. Sigmund Freud? At this moment I see little prospect of it.” The house he referred to was the Schloss Bellevue on the Bellevue-Höhe, a sanatorium where Freud had been assistant doctor, and which was later turned into a hotel before becoming dilapidated and eventually destroyed in the 1960s.

Today, there is a memorial bearing the words of the letter to Wilhelm Fliess at the Bellevue-Höhe, but it is not easy to get there. To discover the small monument visitors need to get off the bus 38A at Parkplatz am Cobenzl, then turn right, walking down onto Himmelstrasse, then turn right again, and finally walking up a concrete stairway and alongside an old path of trees. At the far end of the path will be found the little-known monument to Sigmund Freud.

With the map of Vienna and the Bellevue-Höhe below, you can zoom in or out or move in all directions by using the controls to the left. And the buttons on the top right switch between a traditional map view, a satellite view and a mixture of the two.