Whether you're a fan of classical music or not, you can't really avoid it if you're in Vienna.

Schubert, Hayden, Beethoven, Mozart, they were all here, the city is a veritable who's who of composers and you can still sense their presence with all the different statues, museums, graves and the numerous concerts on offer. 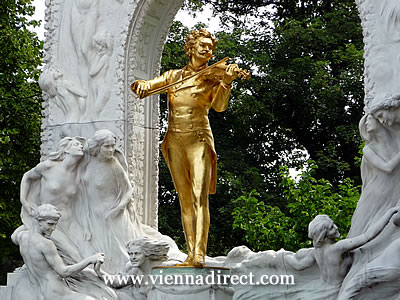 Anyone who was anyone (or who aspired to be anyone) wanted to come here to live and work but only relatively few could say they were 100% Viennese. The Strauss family belonged to that elite.

Johann Strauss senior (1804-1849) may have been responsible along with his contemporaries for developing the waltz from the light-hearted melodies which had become increasingly popular at the turn of the century, but it was Johann Strauss junior (1825-1899) who ensured the musical form stood the test of time.

He was the one who penned the famous waltz classics - The Blue Danube for example - and made sure that this 'frivolous' musical style, as it was first regarded by 'serious' musicians, was given the respect it deserves.

A trip to Vienna wouldn't be complete without a picture of the great man and you'll find an over-the-top gilded statue of him, complete with violin, in the Stadtpark (the Vienna City Park on the Ringstrasse) and if you want more then at the end of the park you'll find the Kursalon, one of the many venues where he performed and where you can still enjoy concerts today.

Or you might be in luck and find one of his operettas playing in one of the city theatres.

True fans can also visit the Strauss apartment which is now a small museum relatively close to the city centre but if want to see his grave you'll have to go a bit further afield to the Zentralfriedhof (central cemetery) although you do get to see his dad's as well.

And while you're there you could look out for Beethoven, Brahms and Schubert to make it worth the trip.

The Stadtpark in Vienna

The Stadtpark ('city park') was built as part of the Ringstrasse (the Ring boulevard) in place of the former fortifications in the late 1800s. It is a pleasant 65,000 m² of greenery to hide away from the hustle and bustle of the city centre. 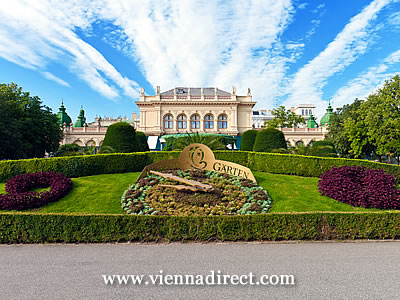 The Kursalon building, as its name suggests, was originally built as a place to 'take the waters' but quickly became a popular venue for concerts and dances. Concerts featuring music from Mozart and Strauss are still held regularly in the elegant rooms with their chandeliers hanging above the polished wooden floors.

With the map of Vienna and the Stadtpark below, you can zoom in or out or move in all directions by using the controls to the left. And the buttons on the top right switch between a traditional map view, a satellite view and a mixture of the two.