St Stephen's Cathedral has been the symbol of Vienna for some eight centuries now.

It is impressive enough to enjoy simply from the outside thanks to its predominantly Gothic exterior and some of its well-known features e.g. the two towers (well, 1 ½...) and the mosaic roof,  but it's still a good idea to have at least a quick look inside. 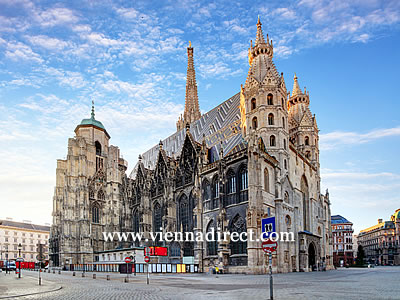 If you do, head for the Gothic stone pulpit with its intricate masonry work and figures - the non-religious stone character is Anton the artist, no modesty there then!

If you're interested in finding out more about the Cathedral, it's possible to join a tour or there are some good books if you prefer to do it yourself.

If you're feeling inspired, you can always climb 'Steffl', the Viennese nickname for the tower. There are over 300 steps but the views are worth the effort - or you can cheat and take the lift.

The tower should have a twin – the north tower – but the funds were used for defence purposes and so only the beginnings of it remain with a makeshift top added to, sort-of, finish it off.

The north tower houses the Cathedral's famous bell, the Pummerin. It's one of the largest in the world and was originally made from melted down cannon balls after the Turkish siege. Don't expect to hear it ring though unless you're visiting at New Year as it's hardly ever used. The north tower is also the starting point if you'd like to tour the catacombs.

Although one of the most visited tourist attractions in the city, the Cathedral is primarily a place of worship so it's possible to attend a service if you want or why not just take a seat and ponder over some of the people who have passed through its doors?

You could for example be sitting in the same pew as once did Wolfgang Amadeus Mozart who lived nearby in the Figarohaus and used St. Stephen's as his local parish church.

With the map of Vienna and the cathedral below, you can zoom in or out or move in all directions by using the controls to the left. And the buttons on the top right switch between a traditional map view, a satellite view and a mixture of the two.