Well, where to start? The Hofburg, or Imperial Palace, is not simply one grand building but rather a series of grand buildings which sprawls over the south-west part of the inner city of Vienna.

Hardly surprising when you consider that it was home to the Austrian rulers from the 13th C. until the end of the Empire in 1918 and most of them chose to leave their mark in some way or another. 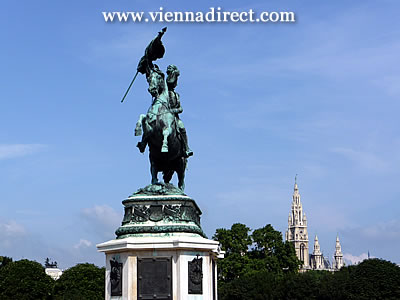 In actual fact records show that how we find it today wasn't even the final version as the First World WarI meant that plans to extend had to be cut short.

You can enter the Hofburg complex from various points but an easy one to find is just off the 'Ringstrasse' by the Palace Gate which is now a memorial to the WW I dead and the site of the tomb of the unknown soldier.

Once through the gate you're in Heroes Square with 2 striking statues of Archduke Karl and Prince Eugene of Savoy, both successful military characters in Austrian history. Off to the right you see the so-called New Palace and to the left, well, nothing as this is where things came to a halt in 1913 and the plans for the second crescent shaped palace never materialised. It is now Vienna's largest square for public gatherings.

Carry on beyond the Old Palace to an inner courtyard and out the other side at the fabulous Michael's Gate with its wonderful statues.

Turn right and go past the world famous Spanish Riding School and then at the Josef's Square you'll find yourself by the Austrian National Library and from there you can cut back through archways and courtyards to where you started.

Passing along the way the Imperial Chapel where the Vienna Boys Choir perform on Sundays (not in high season).

If you're interested you can go inside various parts of the Hofburg (at a cost generally) or if you find the external architcture quite imposing enough, you can take a stroll through the imperial gardens behind the New Palace and simply ponder over what a mighty Empire Austria once must have been.

With the map of Vienna and the Hofburg below, you can zoom in or out or move in all directions by using the controls to the left. And the buttons on the top right switch between a traditional map view, a satellite view and a mixture of the two.