As with many German names, 'Schönbrunn' can be literally translated into English and means 'beautiful fountain', a reference supposedly to the Holy Roman Emperor Matthias (also a member of the Austrian Habsburg dynasty) who is said to have uttered the words on discovering the fountain in the 17th century.

In those days the area, some six kilometres from the city centre, was very much out in the country and was a popular escape for the aristocracy to indulge in some hunting. 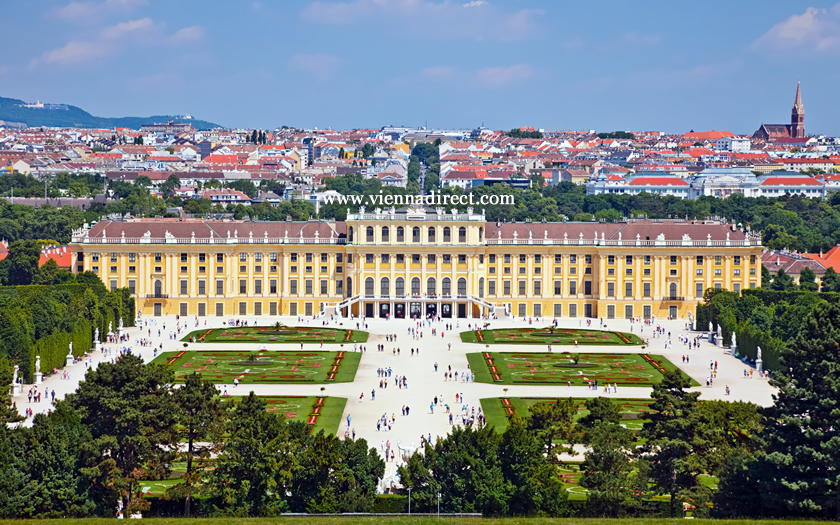 The fountain in question still exists in the grounds of the present-day palace complex and although its purpose now is purely decorative, it did supply the palace with water till the end of the 18th C.

Schönbrunn has certainly come up in the world since it first came into the hands of the Austrian nobility when Maximilian II acquired the land in 1569. His hunting lodge was destroyed by the Turks in 1683 and Leopold I intended its successor to be a much grander affair and one to rival the Palace of Versailles.

Unfortunately war got in the way of the project, which was to have been built where the Gloriette now stands, and a subsequent lack of funds meant a simpler version was created and it wasn't until the reign of the Empress Maria Theresa (1740-80) that the magnificent structure we can admire today was built.

Around 40 of the 1441 rooms of the palace are open for public viewing, including the various private apartments used by the Habsburg monarchy and the Hall of Mirrors where a six-year old Mozart played for Empress Maria Theresa.

As you wander through the palace, try and  visualize some of the important events that the walls  have witnessed: the arrival of Napoleon and his troops, the death of Austria's Emperor Franz Joseph, the signing of the abdication in 1918 by Emperor Karl I, the British soldiers based here during the allied occupation of 1945-55, the meeting between Kennedy and Krushchev in 1961....

You can easily spend a whole day at Schönbrunn as not only can you take a guided tour around the interior, but the palace grounds themselves are worthy of a visit. 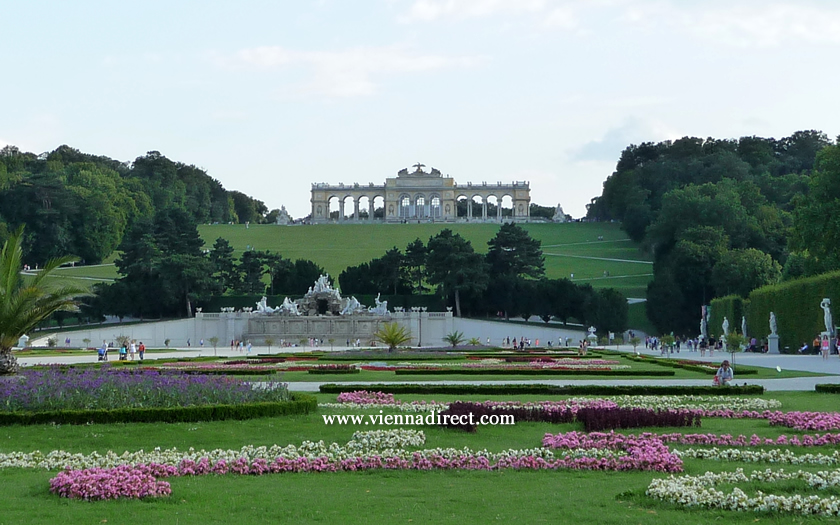 The Gloriette at Schönbrunn Palace Vienna

The palace complex covers around 1.6 km² and the fabulous palace garden, also dating back to the time of Empress Maria Theresa, has lots of hidden treasures e.g. a Roman ruin (from 1778!), the world's oldest zoo, the Neptune fountain, an obelisk, the impressive Gloriette, a maze, botanical gardens, even a public swimming pool and of course, plenty of refreshment possibilities where you can sit back and enjoy the sumptuous surroundings.

There is a wide variety of tickets on offer for entrance into Vienna's Schönbrunn palace, either on a guided tour or an audio tour with headphones, or a walking tour for the various formal gardens.

The Grand Tour covers the palace interior and the private apartments of Emperor Franz Joseph and his famous wife Sisi (the Empress Elisabeth), as well as state rooms from the time of the Empress Maria Theresa.

The Classic Pass adds the attractions outside the palace, such as the Gloriette, the Orangery Garden, the Privy Garden and the maze.

Those with children may prefer to pick the Family Pass, which includes a shorter tour of the rooms, the Children's Museum, as well as the Imperial Apartments at the Hofburg and the Imperial Furniture Collection elsewhere in Vienna.

The Schönbrunn Palace concerts are held in the evening at the Orangery and the classical concert performance can be combined with dinner, a tour or booked as part of the Vienna Pass package.

Schönbrunn is one of the most popular Viennese attractions and one that you really should have on your 'to do' list if you have the time to do it justice. After all, over six million visitors a year can't be wrong.

With the map of Vienna and the Schönbrunn Palace below, you can zoom in or out or move in all directions by using the controls to the left. And the buttons on the top right switch between a traditional map view, a satellite view and a mixture of the two.

The palace is open daily, including public holidays.